It is a little hard to directly compare these results with the Idelalisib data, partially reproduced here from Part 1, with one correction to the table (column 3: DOT = median duration of treatment):

It is tempting to conclude that the response rates with Ibrutinib are a little higher, but such comparisons will required much larger data sets. At the moment it is fair to say that these therapeutics both provide superb novel options for rrCLL patients.
Returning to Ibrutinib, there will be additional data from monotherapy studies shown at ASH. Abstract #4163 reports on an extension study of Ibrutinib monotherapy in treatment-naive CLL and in rrCLL patients. An important parameter of this study is that it included treatment-naive (likely newly diagnosed) patients; the data for discontinuation due to disease progression (PD) shows that nearly all of these early-treated patients maintain a response for at least the DOT.

After 2.5 years, 76% of this patient population was still alive, an impressive number.
Abstract #673 also examined the impact of Ibrutinib monotherapy, in this case in elderly patients with or without the del(17p) cytogenetic factor indicating high risk for progression. In this study there was a significant difference in the PR percentage, with 81% of patients with wild-type 17p responding while only 53% of patients with a deletion of 17p responded (p = 0.04). This suggests more (or larger) studies will be required to sort out the best patients for Ibrutinib therapy.
A very nice study will be presented by investigators at The Ohio State University (Abstract # 2872). Using multivariate analyses of patient response, progression and survival, these investigators compare Ibrutinib monotherapy to checkpoint-inhibitor therapy (alvocidib, dinaciclib, or TG02) to “other” therapy, in del(17p) rrCLL patients. “Other” is unfortunately not identified, but must include standard-of-care, which would normally be chemotherapy plus Rituxan. Here is a snapshot of the data at 24 months (the analysis is beautiful and I won’t reproduce their graphs here):

These data really drive home the importance of the new therapeutics and new therapeutic combinations, where we are seeing improvement in PFS.
There are a swarm of newer small molecule drugs coming up, and these will be covered in Part 3.
November 15, 2013
The American Society of Hematology Meeting will take place in New Orleans, December 7 – 10, 2013. The abstracts are available at http://www.hematology.org/Meetings/Annual-Meeting/Abstracts/5810.aspx
Part 1. Small molecule PI3Kdelta inhibitor Idelalisib in the treatment of Chronic Lymphocytic Leukemia (CLL).
It is useful to remember that most CLL patients have indolent disease and are in a “watch and wait” mode with their physicians, who will not initiate treatment unless they see signs that the cancer is becoming active and/or the patient has one or more risk factors. Therefore in clinical trials the CLL patients are those at high risk. Typically “relapsed or refractory” CLL (rrCLL) patients have cytogenetic markers of poor prognosis (mutated p53, del(17p), del(11q), trisomy 12, mutated NOTCH1), or are patients who have failed multiple prior therapies (chemotherapy and/or antibody therapy such as Rituximab treatment), patients with “bulky” disease indicating lymph node and other lymphoid organ involvement, and patients with unmutated IGVH sequences. Often these high risk markers occur together. It is important to realize that at this time CLL is not considered a curable disease, and that the goal is therefore to increase median progression-free survival (PFS) and median overall survival (OS), the latter referring to time until death.
That said, we are witnessing a remarkable time. Terrific new therapies are being developed, and physicians look forward to offering their patients a chance at a cure.
Lets start with a drug class I think has great promise, inhibitors that act downstream of B cell receptor (BCR) signaling. CLL is a B cell lymphoma, and is dependent on chronic activation of these signaling pathways. Here is a model to get us oriented, from the Onclive website:

Note that Syk, Btk and PI3K are upstream (relative to the cell surface and BCR) and therefore are critical components of the pathway. Drugs targeting each of these signaling kinases have been developed. AKT, mTOR and others, generally more familiar to us from the solid tumor literature, are further downstream.
There are four isoforms of PI3K relevant to the drug class: alpha, beta, delta and gamma. Different drugs have selectivity for one or more of the isoforms.
For treatment of CLL, the lead therapeutic in the class Idelalisib is a PI3Kdelta(d) selective inhibitor from Gilead. PI3Kd signaling is known to be essential for the activation, proliferation, survival and tissue homing activity of lymphoma cells. On October 9th a phase 3 CLL clinical trial of this drug was stopped ahead of schedule based on a positive risk/benefit assessment. The drug is also under New Drug Application (NDA) review for indolent Non-Hodgkin’s Lymphoma iNHL) based on results from multiple phase 3 trials. Idelalisib is trailing just a step behind Ibrutinib, a BTK inhibitor, in the approval process – Ibrutinib was approved for Mantle Cell Lymphoma (MCL) on November 12th. Neither drug is approved for CLL, the most common lymphoma.
Both drugs have moved aggressively into combination therapy trials. Some of the early trials (phase 1 and 2) will report out interim data at ASH.
Abstract #4176 presents analyses of Idelalisib (IDELA) given in combination with Rituximab (Rtx) antibody therapy plus chemotherapy (B: bendamustine or C: chlorambucil) in high-risk rrCLL patients. Results are encouraging and shown in Table 1, where ORR = stable disease (SD) + partial response (PR) + complete response (CR). Its important to note that these are clinical trial terms and do not reflect outcomes, just observations at specific timepoints. Regardless we are looking for high % ORR, PR and CR. Importantly, the median duration of exposure was 18 months at the time of analysis, meaning that 18 months is the median amount of time patients have been exposed to drug without withdrawing due to toxicity, disease progression, or death. More importantly, the median duration of response (DOR) to therapy had not been reached within the 18 months (so that’s good, patients are still on drug and are still responding) nor had the median PFS been reached (so more patients have survived than have not survived). The IDELA-Rtx-C data are similar, just of shorter average duration with a median exposure = 7.7 months (I’m guessing here that this arm of the trial enrolled later). Also notable is the toxicity data from this trial, which tracked pretty consistently with the chemotherapy regimen. When the combination therapy included bendamustine, neutropenia was the defining toxicity, with > 60% of patients experiencing grade 3-4 neutropenia. When the combination therapy included chlorambucil, liver transaminase elevation was the defining toxicity, with > 21% of patients experiencing grade 3-4 liver toxicity. Its important to realize that these are severe, but manageable, toxicities for most patients.
Abstract 2878 presents a similar study, but in this case the combination therapy given with Idelalisib was limited to chemotherapy. Chemotherapy consisted of B: bendamustine, F: fludarabine or C: chlorambucil, given in standard doses. This trial was run in a heavily pre-treated patient population having a very poor prognosis. The data are very encouraging given the composition of the enrolled patient population (Table 1). The adverse events (AEs) were cytopenias and gastrointestinal tract (GI) disorders. This study demonstrates that Idelalisib has potent activity in combination with chemotherapy. 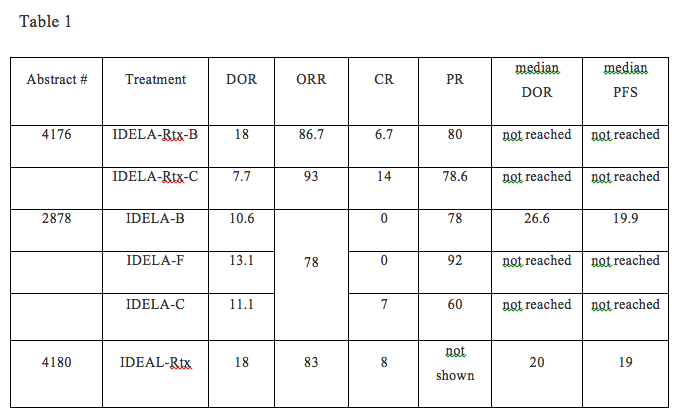 Abstract 4180 gives us data from an additional study, in which Idelalisib is paired with anti-CD20 antibody therapy (Table 1). As in the other studies the cohorts were comprised of a high risk patient population. This was a small phase 1 study with an extension arm, enrolling 40 patients. This study produced some sobering results that remind us how serious a disease aggressive CLL is, and how potent the drugs treating this disease have to be. Notably, 25% of patients did not enter the extension study due to disease progression, 6 patients died. A further 23% did not enter the extension study due to AEs. These data remind us that response rates readout at a specific pre-determined time during the trial, and do not reflect outcomes. Regardless the median PFS and DOR for all patients (N=40) and were 20 and 19 months, respectively. Median overall survival (OS) had not been reached.
The phase 3 study mentioned at the outset, which was stopped early due to significant evidence of clinical benefit, was very similar to, if much larger then, the Phase 1 study presented in abstract 4180. We don’t know much about the trial data yet, but Gilead’s press release states that the “Phase 3 study … evaluating idelalisib in previously-treated … CLL patients who are not fit for chemotherapy will be stopped early  … based on a predefined interim analysis showing highly statistically significant efficacy for the primary endpoint of progression-free survival in patients receiving idelalisib plus rituximab compared to those receiving rituximab alone. The safety profile of idelalisib was acceptable and consistent with prior experience in combination with rituximab in previously treated CLL.”
I think the general takeaway here is that a high proportion of those patients who respond did well over time. The fact that they did so without additional chemotherapy is very encouraging. PFS in either not being reached or is reached at 20 months or so. This suggests that impact on OS will be significant for all of the drug combinations presented.
Additional analyses from Phase 1b and 2 studies were presented in abstract #1632. This abstract presents data comparing responses among CLL patients with high risk prognostic markers (del(17p) or TP53 mutation, del(11q), IGHV mutation and NOTCH1 mutation) to CLL patients without these markers. rrCLL patients given Idelalisib monotherapy or combination therapies responded equally well to treatment regardless of the presence or absence of these critical genetic markers of disease aggressiveness. That is a very important result that suggests great potential for CLL therapy with Idelalisib. The table is below. 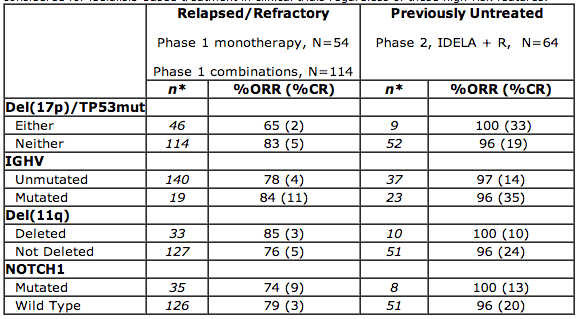 Note that the response rates in the phase 2 Idelalisib + Rtx trial in previously untreated (i.e. newly diagnosed) patients are quite high, and this is exactly what you want to see as to drug moves to treat patients earlier in their disease course.
Next up is a review the Ibrutinib data in the same disease, and also a quick look at the other therapies in these drug classes.